BESA, By Burak Bekdil*: The Invincible Sultan: Is Erdoğan Losing His Populist Charm?

Recep Tayyip Erdogan, photo via Office of the President of Russia 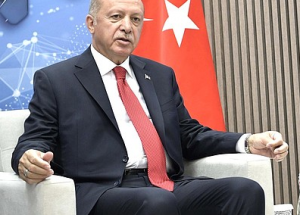 EXECUTIVE SUMMARY: At testing times, Turkey’s Islamist strongman, President Recep Tayyip Erdoğan, has always sought refuge at home, taking pleasure in his massive popularity. But after 17 consecutive years in power, having won every election in which he ran, Turkey’s self-declared Sultan is showing signs of fatigue – and his popularity may be wearing thin.

Turkish president Recep Tayyip Erdoğan behaves like a cornered cat when it comes to regional politics: he acts savagely and erratically, lashing out at both real and imagined enemies. His adversaries are the EU (Italy, France, Cyprus, and Greece in particular, due to a row over hydrocarbons in the Eastern Mediterranean), the US, and Israel. In neighboring Syria he is threatening a bloody military assault on the Kurds. He is explicitly unwanted in fellow Muslim countries like Egypt, Lebanon, and the UAE due to his rigid support for Hamas and the Muslim Brotherhood. In Libya he is waging a proxy war against secular Muslims who want to oust an Islamist government in Tripoli.

At times like these, Erdoğan has always sought refuge at home, taking pleasure in his massive popularity. But after 17 consecutive years in power, having won every election, Turkey’s Islamist strongman is showing signs of fatigue. And as the country continues to fail both economically and politically, Erdoğan may no longer be invincible.

“He who wins Istanbul wins Turkey” is Erdoğan’s own dictum. He may be right: Istanbul is home to nearly 15% of Turkey’s 57 million voters and accounts for 31% of its GDP. Erdoğan launched his political journey by being elected mayor of Istanbul in 1994.

On March 31, a little-known opposition candidate, Ekrem Imamoğlu, won Istanbul (where more than 11 million voters are registered) by a margin of 13,000 votes. Erdoğan challenged the result and demanded a new vote – only to lose, the second time, by a margin of 800,000. He lost both Istanbul and Ankara after 25 years of Islamist rule.

Erdoğan’s bitter defeat came at a time of a rise in anti-government protests, mostly focused on environmental issues. “The wave of peaceful demonstrations – the country’s largest since the 2013 Gezi Park rallies – suggests a newfound vitality among the opposition, with potentially deep implications for Turkey’s democracy,” wrote Soner Cağaptay and Deniz Yüksel for the Washington Institute. “This consolidation of power, coupled with frequent crackdowns on protestors, left many in the opposition disheartened.”

With 4.7 million jobless and unemployment continuing to soar, 15% inflation, and high borrowing rates, Turkey’s economy is not functioning well. The national currency, the lira, has been volatile ever since a serious crisis last year.

Erdoğan is at war with Turkey’s 15 million or so Kurds. He recently appointed government trustees to three overwhelmingly Kurdish provinces in southern Turkey, escalating tensions between Ankara and the Kurdish southeast and further undermining Turkey’s already problematic democratic outlook.

It would be ironic if Erdoğan were to lose power after his long stretch of Islamist rule. Necmettin Erbakan, whom Erdoğan often referred to as “master,” became Turkey’s first Islamist PM in 1995 when he won 21% of the national vote and signed a coalition agreement with a center-right party. Erbakan’s political vision featured a rigid Islamism based on an anti-Western, anti-EU isolationist rhetoric known as “the National View” – a bizarre policy blend deeply hated by the (then) strong military top brass. Wisely, Erdoğan parted ways with his “master” and burst onto the political stage with a less rigid Islamist policy calculus. His Islamism was to be compatible with Western democratic culture and capitalism, or so he claimed. In a 2000 interview he said “he had thrown away the shirt called “National View.”

Erdoğan and his top brass – whom Erbakan called “our naughty boys” for their departure from the straight and narrow – held that a more pro-Western rhetoric had to be showcased if Islamists wanted to come to power. This was a political struggle between the Islamist conservative and reformist wings.

Erdoğan’s second-in-command was his long-time comrade Abdullah Gül. Through a controversial parliamentary vote in 2007, Gül became president with Erdoğan, who was PM at the time. Erdoğan and Gül thus ran the show together, à la Putin and Medvedev. In 2009, Erdoğan appointed Ahmet Davutoğlu, a Gül confidante, as FM, and, in 2014, as PM. The third man in Erdoğan’s hall of fame was brilliant economist Ali Babacan, who became finance minister.

All three men grew disillusioned with Erdoğan’s increasingly despotic one-man approach to governance. Now in political exile, they are showing signs of making a comeback. Last year, this prospect was just another tidbit on the Ankara political grapevine, but it has gone beyond mere speculation. Gül, Davutoğlu, and Babacan are working day and night to formally launch their version of a market-friendly, pro-Western, pro-democracy political party (or two parties).

Erdoğan has threatened that they will pay a high price for their “treason” and claimed that a new party (or parties) would mean “dividing the umma.” If launched, this would be the sixth Islamist party in Turkey’s political history, with Erdoğan’s emerging as the only successful experiment.

How popular the “new party” will be (to use the phrase of Turkish observers) is anyone guess. Erdoğan’s Justice and Development Party, supported by the ultra-nationalist Nationalist Movement Party, appears to be able to give him the 50% plus one vote he needs to be reelected in the presidential elections of 2023. The “new party” will try to challenge him directly, with the aim of winning a share of his conservative voter base. Observers rightly think the “new party” will appeal more to “intellectual conservatives” whereas Erdoğan’s party will continue to target less educated Islamists.

“Even if the ‘new party’ won [only] a couple of percentage points from Erdoğan, it may be the beginning of the end for him,” an Erdoğan confidante admitted.

Burak Bekdil is an Ankara-based columnist. He regularly writes for the Gatestone Institute and Defense News and is a fellow at the Middle East Forum. He is also a founder of, and associate editor at, the Ankara-based think tank Sigma.