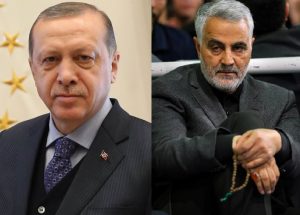 EXECUTIVE SUMMARY: The Turkish Foreign Ministry’s belated statement in response to the Soleimani killing was dry in its language, reflecting the government’s confusion over what position to take. While the government is expressing itself with caution, the Islamist pro-Erdoğan press is expressing a wide range of often contradictory responses. The lack of clarity in Ankara over the Soleimani affair betrays Turkey’s directionless regional policy.

The Turkish Foreign Ministry, which is usually quick to weigh in on matters of world affairs, was silent for hours after news broke of the killing by the US of elite Quds Force commander Maj. Gen. Qassem Soleimani.

The killing sent messages on many wavelengths to Turkey’s Islamist government. At the same time, it unveiled the conflicting strands of Turkey’s regional and wider policy calculus, its deep inconsistencies, and its fractures.

Turkey has a deeply pro-Sunni sectarian nature. Iran, an expansionist Shiite state, has thus always been problematic for Turkish Islamists. They are divided over whether to support it against the American “Great Satan,” to support the Great Satan against the Shiite Satan, or to simply support every conflict that develops between the two Satans.

Soleimani’s killing has only added to Turkish confusion over Iran, with which it fought its last war in 1639. The two states have ranged since then from friendship to cold friendship to hostility, going through periods of conflict and proxy conflict.

The Turkish Foreign Ministry’s belated statement was dry in its language, reflecting the confused Turkish mind over what position to take—or, indeed, whether a position should be taken at all. The ministry expressed grave concern over the escalating tensions between the US and Iran and said increasing hostilities in Iraq would destabilize the Middle East and hamper peace efforts. It said the US move would increase instability and violence: “Turkey has always been against foreign interventions, assassinations and sectarian clashes in the region. We call upon all parties to show restraint and act responsibly, avoiding moves that can threaten the peace and stability in the region.”

President Recep Tayyip Erdoğan’s communications director, Fahrettin Altun, said Soleimani’s killing posed a threat to regional security and stability, stating, “Violence begets violence and hurts the interests of all sides—without exception. We call on all parties to exercise common sense.” Presidential spokesperson İbrahim Kalın called on all sides to remain calm and avoid steps that would fuel tensions. Ankara would continue to use diplomacy to achieve regional and global peace.

Ruling Justice and Development Party (AKP) spokesman Ömer Çellik urged all parties to show restraint. “The security and stability of Iraq is of vital importance to Turkey and to the region. Actions that cause instability in Iraq are detrimental to the entire region,” he said.

Erdoğan’s statement was no less dry. Turkey expends great effort to reduce tensions between the US and Iran, he said. “Turkey always stands against foreign intervention and considers the recent US attack in Baghdad with this same understanding.” He predicted Iran will respond to the killing of Soleimani, stating, “The choice of the US to kill a top Iranian commander will fuel tensions in the region.”

Such were the official Turkish responses to the drone airstrike that killed Soleimani. Nuances have been revealing themselves, however, in the Islamist/pro-Erdoğan press.

İbrahim Karataş, columnist for the militant Islamist publication Yeni Akit, wrote: “The deaths (of Soleimani and others in his motorcade) are good for the ummah.” Karataş calls Soleimani a murderer and the mastermind of Shiite expansionism in the Middle East. “[Soleimani] killed babies for the dangerous ideology called Shiaism… The Shia do not view Christians or Jews as enemies. Their biggest enemy are the Sunnis. What matters is not who killed [Soleimani]. It is who was killed… With that [killing] Iran will have to deal with the US instead of Muslims.”

Ali Karahasanoğlu from the same daily has a different opinion. “[Soleimani] was killed by an oppressor, not by the oppressed,” he wrote. “…As he was killed by the US, he died a victim.”

According to Yakup Köse of the daily Star, “a Shia imperialist was killed by another imperialist.”

Zekeriya Kurşun from Yeni Şafak wrote: “The killing will fuel hatred of the West by the East, and Shia by the Sunni.”

Yusuf Kaplan of the same paper thinks the US is a rogue state, but adds, “The Iranians have always conspired with the West against Turkey and stabbed us from behind at every opportunity…Iran is a secret, useful ally of the US.” Kaplan cautioned, however, that Turkey should maintain good relations with Iran in order to avoid falling into a Western trap.

The confusion in Ankara over the killing of the Talented Mr. Soleimani betrays the lack of direction in Turkey’s regional policy. Sentiments among Turkey’s fiercely pro-Erdoğan Islamists over Soleimani’s death range widely and include the following, among others:

“We should be happy because Soleimani was a staunch supporter of Syrian president Bashar Assad, our regional nemesis.”
“Assad is our regional nemesis, true, but he is an ally of our new ally, Russia, whose other ally is Iran. So we should be sorry for Iran’s loss.”
“We should be unhappy because our worst enemy in the region, Israel, is happy.”
“We would have been happy if Soleimani had been killed by a Sunni Muslim, but we can’t be happy about his being killed by the Great Satan.”
“Russia and Iran support the Libyan National Army, which is our enemy. So we should be happy to see Soleimani killed.”
“Soleimani fought against ISIS, but also against our less jihadi brothers in Syria (the former Free Syrian Army). So we should be happy to see him killed.”
“He hated Sunnis, so we should cheer his death.”
This list illustrates the contradictory nature of Turkish foreign policy, the difficulty of defining Turkey’s regional interests, and the poisonous influence of a Turkish Sunni supremacist worldview.

Burak Bekdil is an Ankara-based columnist. He regularly writes for the Gatestone Institute and Defense News and is a fellow at the Middle East Forum. He is also a founder of the Ankara-based think tank Sigma.