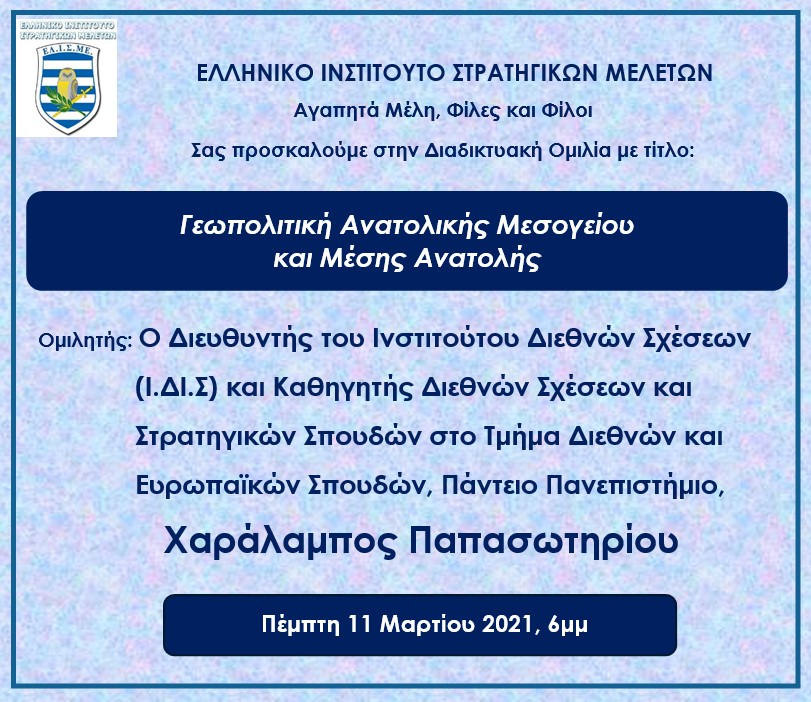 The "1453" plan, the Bashi-bazouks and the "Grey Area"  between Greece and Turkey 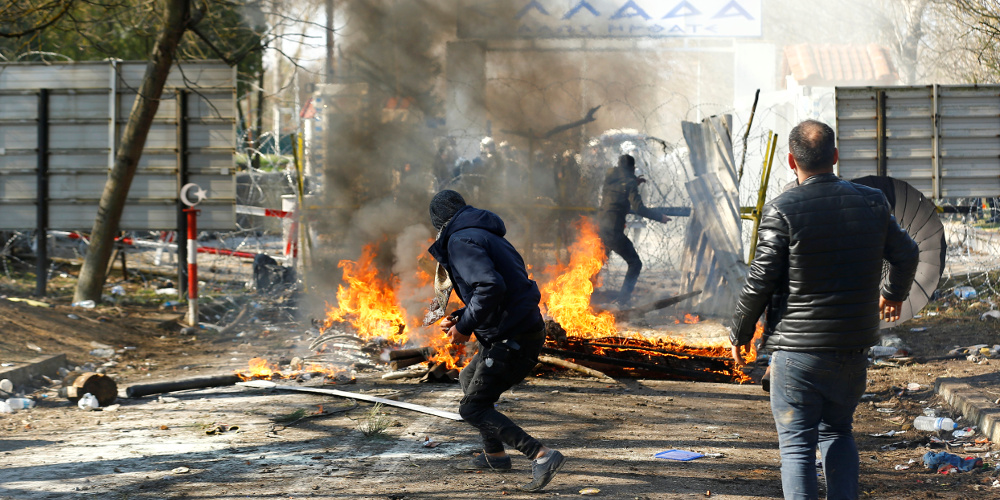 The events in Evros, especially in the Karaağaç Triangle, from February 28 until recently, when the Sultan decided due to various reasons (internal, frustration, coronavirus, etc.) to withdraw his guided "besiegers" and bashi-bazouks from the area, brought new data to this undeclared war of Turkey against Greece. The unexpected and unprecedented for Turkey strong resistance of the hitherto appeasing Greece disappointed the Sultan's staff, who considered certain the success of the plan to dismantle the country's defensive deterrence and thought of Greece as the weak link for its illegal maximalist nationalist pursuits and aspirations. Developments in general also unpleasantly surprised the Sultan and his "henchmen " in this unprecedented war he unleashed against Greece.

The “1453” plan and the Continuous Defeats

In recent years, despite the stubborn and verbose statements of its president, Turkey has experienced so many continuous defeats for the first time. The defeats began in the province of Idlib in Turkey, signaling a great debacle for Turkey. There, for the first time ever, the Turkish army faced the regular Syrian Arab Army, battered and decimated by the years of war. With the help of the Russian air force, resulting in repeated defeats with dozens of dead and wounded, they managed to lose about 1/3 of the territory of the Idlib province and to find 8 Turkish observatories trapped at the mercy of the Syrian army, a real shock to the arrogant Sultan, the Turkish army and the Turkish society.

Then, the Sultan decided to implement his long-organized plan under the name "1453", as revealed by the newspaper Cumhuriyet. In other words: the invasion of Greece by "weaponizing" migration flows, the disintegration of the borders with the violent influx of immigrants, the complete destabilization of Greece, thus threatening and blackmailing Europe, which ultimately did not succeed. At the same time, the Sultan literally suffered constant diplomatic defeats, as NATO did not show any willingness to get involved in the Syria's swamp, and Europe did not accept Turkey's requests (financial aid, understanding in Syria, visas for Turkish nationals). The main diplomatic defeat suffered by Turkey, and the one that hurts the most happened, in Moscow, where the" Tsar of Russia" President Putin was forced to sign a humiliating agreement for Idlib, putting an end to his grandiose revisionist pursuits in the region. The event took place in front of the statue of Catherine The Great (remember: Treaty of Küçük Kaynarca, 1774). Thus the "1453" plan, which bore a pretty symbolic name, was his lifeline for the repeated defeats he had to justify within his own country, who is now beginning to doubt him. Of course, he had to achieve something that ultimately was not achieved.

This operation, which began on 28 February 2020, is considered and is the epitome of the hybrid war. It was organized and executed by two Turkish state structures, the Interior Ministry with the military guard (Jadarma) and the Turkish intelligence service (MIT) and the "henchmen of Erdogan", Süleyman Soylu and Hakan Fidan respectively. The aim is to pierce the Greek border with the with the Turkish-led and Turkish-transferred immigrant population, which the Erdogan regime has deliberately accumulated in Turkey for special purposes and pursuits. I am referring to the deliberate call of migration flows from Sunni Islam, for the nationalist-revisionist purposes of the National Oath (Misaak I Mili)), which the successor of Ataturk, Erdogan, must implement. By abolishing the visa and by buying a cheap Turkish Airlines ticket (35-50 dollars), every Sunni Muslim from Pakistan, Bangladesh, Afghanistan, Maghreb, could make his dream come true and enter Europe through his target state, Greece. We will not analyse the tragic and pernicious mistakes that Greece made in dealing with this immigration threat, which was the beginning of the greatest danger that Greece is suffering, with the risk of altering its ethnic composition, since Europe closed its borders and the immigrants stayed here, i.e. Greece. At this point, I have to mention that all the "invited" immigrants from the aforementioned countries in Turkey are only Sunni Muslims and no Christians. 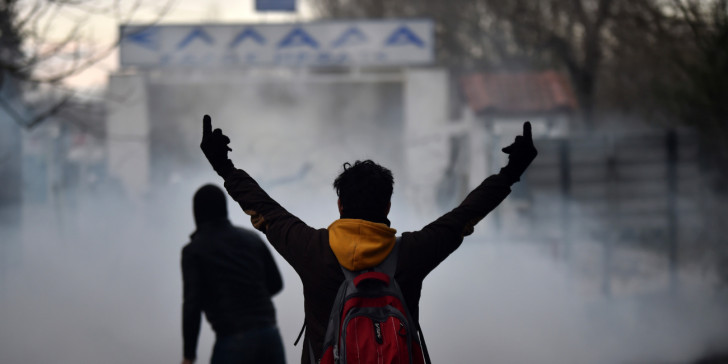 In the first days of the invasion and especially in the vanguard of the "attacking" masses, immigrant families were used, along with young men with cutting tools and other weapons, who guided the attacks and fired smoke, tear gas, firecrackers, etc. Fortunately, Greece reacted as defined by international law, the Constitution of Greece and the national sovereign rights of a state entity. Greece endured, and Evros did not fall.

Erdogan suffered another defeat, a defeat that is considered the worst for the Sultan because he did not expect it and was sure of the success of his plan. So, he decided to continue the siege of Greece for domestic consumption since his authority is clearly now in question. This time he decided to use proxy powers, who are extremists he's been using for years. It has been observed recently that the attacks in Evros are carried out by young people. There were no women or families, who had left the area, as they had perceived the fraud of "open borders" that the Turkish fifth column had falsely created. Even the physiognomies often changed. There were constantly new faces starring in the episodes on the fence of the Karaağaç Triangle. This was considered proof of the transfer of Islamic extremists and jihadists from Syria, meaning that they've used the methodology of the Ottoman Empire: the historically (un)known Bashi-bazouks.

The word bashi-bazouk derives from the complex Turkish word baş (head) and bozuk (broken) i.e. damaged head and is used to describe the particularly unruly, wild, beastly irregular soldiers of the Ottoman army. By extension, the word bashi-bazouk implies an act reminiscent of the arbitrariness and atrocities of the Bashi-bazouks. The word bashi-bazouk has become synonymous with the robber and the criminal, who inspires terror for his atrocities. The Bashi-bazouks were an Asian, Turanian tribe, used by Mohammed the Conqueror as a guard during the fall of Constantinople. Later in the Ottoman Empire, the word Bashi-bazouk was used to denote any civilian, i.e. in contradistinction to a soldier. In the 19th century, bashi-bazouks were the irregular soldiers, who were not subject to regular military discipline. The bashi-bazouks replaced the akinjis, who in the early years of Turkish history oppressed the ordinary people.

Evros showed us the way

The mother of all battles, took place in Evros river, in the hybrid war launched by Erdogan against Greece. Evros withstood the Turkish hybrid war because for the first time the authorities were heard, namely the political and military leadership of the Ministry of Defence and the Ministry of Citizen Protection, who were approved to do their job. The war has many phases until the armed conflict. So, we should realize that Greece and Turkey are already in the "grey area" between peace and conventional war. We are constantly being tested and, if we fail, the consequences will be catalytic for our future. Erdogan was wrong because he took us for granted, and he thought of the reaction of Greece, as hitherto calming, timid and phobic. The different reaction, the plan, the composure, the determination, the ability, the cooperation, and the unity were the crucial components that brought these results. The developments in Evros, apart from proving the high capability of our Armed Forces, awakened the national feeling of the Greeks, expelling this feeling of “turcophobia” and perhaps "Turkishness" possessed by part of the Greek people. On the one hand, we should thank the Hellenic Armed Forces and the Security Forces for the superior and adequate capability, professionalism, morale and wisdom they showed and on the other hand thanks to  Sultan Erdogan who awkwardly awakened the dormant moral forces and abilities of the Greek people  in general. We can successfully deal with Turkey and win to everything it plans against us. Evros showed us the way.

*Ioannis Athan. Baltzois is Lieutenant-General ret., president of the Hellenic Institute for Strategic Studies (HELISS), former defence attaché in Tel Aviv, former Operations Officer of the ECMM (E.U.)  in the Bosnian war, graduate of the Military College of War, the Hellenic National Defence College (HNDC), the Tactical Intelligence School (U.S. Army). He holds a master's degree (M.Sc.) in Geopolitical Analysis, Geostrategic Synthesis and Defence Studies and  International Law from the National and Kapodistrian University of Athens.