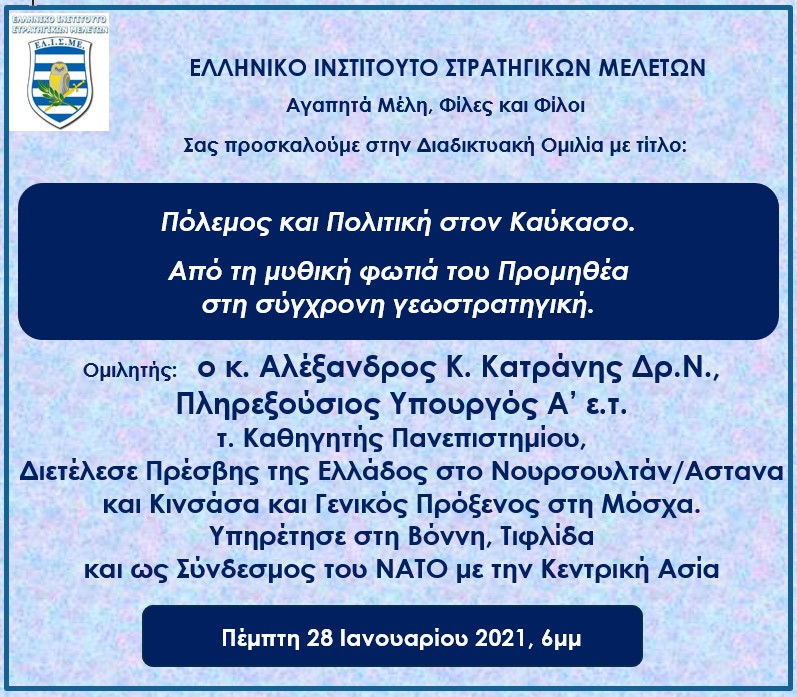 Celebration for the 2500 years from the Battle of Salamis

On 20 September 2020 organized by the World Hellenic Diaspora: a project of the Hellenic Cultural Center of the Southwest and its Member Organizations and the General Secretariat for Public Diplomacy and Greeks Abroad of the Ministry of Foreign Affairs-Athens, Greece

Remarks by Mr. Dimitris N. Iliopoulos, Ambassador ret., Former Ambassador of Greece to the UAE, Albania and the EU, Former EU Representative to the International Organizations in Geneva (UN) and the Hague, Member of the Board of the Hellenic Institute of Strategic Studies (HELISS), Research Associate to The Hellenic Foundation for European and Foreign Policy (ELIAMEP)

At the outset, I would like to congratulate the organizers of this very timely event and to thank them for inviting me to share a few thoughts on the occasion of this historic anniversary of paramount importance.

As we stand now, looking back 2500 years into our Nations’ glorious history, the naval batt0l00102e of Salamis, appears as a unique, game changer event that changed the historical path not only of Greece, but of what is known as the western civilization and its democratic and humanistic centered values.

If our ancestors had failed to annihilate the strongest war fleet of the time, the history of Europe and consequently of the Western world might have been written differently and the totalitarian and oppressive political paradigm might have prevailed not only in Europe but globally as well. Despite their internal strives and differences, the Greeks of the time have followed the illuminated military leadership of Admiral Themistocles and although heavily outnumbered displayed courage and bravery to bring to an end the so far successful incursion of the Persians of Xerxes into the European soil. This victory has been followed by the great victories at the battle of Plataies and the naval battle of Mykalae, which put a definite end to the Persian ambitions of expanding into the European continent.

But at this point, I deem it necessary to dwell from a national point of view on the specific attachment of the Greeks with the Sea. It is not by coincidence, that the contemporary Greek writer Stratis Myrivilis has written: “All the seas of the world are Greece ...” The Greek soul is blended with the sea and come as no surprise the seafaring abilities that interwoven with bravery and philopatriae, love for the homeland, led to this astounding historical landmark victory.

One of the most characteristic and top historical peculiarities of Greece is that in this country, from the point of view of culture, everything looks towards the sea. Thus, the primordial identification of the country with the liquid element was revealed, under four world-historical dimensions, which shaped the respective tenets and experiences over the centuries.

The tenet of the myth. The Argonauts infuse time with the water of the heroes' lives. The first rules and methods of seafaring were recorded in their voyage. They have awakened astronomical knowledge, extended naval vision, overcame gravity, controlled orientation, established the exploratory appeal supported by ingenuity and unparalleled bodily ardor. In an environment of a similar spirit, the son of the Argonaut Laertes, the ingenious Homeric hero Odysseus, appears to mankind, to show and shine the eternal model of imaginative intelligence in the torturous roads of the seas.

The tenet of the divine. The seas are ruled and governed by Poseidon, the greatest Pelasgian god, protector but also punisher of the excesses. From the heart of the Greek sea springs the divine heritage. Only from the sea could the rich human imagination invite the goddess of radiant beauty, the Emerging Aphrodite. And further, in the aftermath, the merciful Panagia ton Ellinon, the "Thalassomachousa", the "Pelagonitissa" and the "Gorgona" bring the balm of consolation to the seafarers so that the sailors would have good seas and painless voyages.

The tenet of euphoria. From the ancient times of the Minoan Sea Empire to the modern merchant shipping, the Greek navy holds the enviable scepters. It transports the goods of life to the ends of oekoumeni, paves the way for cosmopolitanism, inspires literature, motivates art and gives fame to the island songs. It is the shipping of wealth and economic power that dominates our time. From the treasures of that shipping waswritten the endless work of humanitarian and cultural benevolence with the deposit of more and more new beneficial acquisitions.

The tenet of the homeland. It is what nourished the love for the homeland and equipped people for life. And the sea that surrounds the homeland was from the beginning the impregnable fortress of values and institutions. The highest symbol of such naval power and military glory stands in the pyramid of history, the Battle of Salamis.

The inaugural paean, sung by the Greek warriors as they charged to fight, reveals with precision the sanctioning of the Greek tenet towards their homeland. It was saved by the tragic poet Aeschylus, who also fought in this battle, and urges them to wage an all out war to protect their families, their homeland and their beliefs and values.

Extensive work on those concepts and tenets has been carried out by the European Art Center of the ancient town Paeania, near Athens, and its inspired President Dr. Evangelos Andreou who maintains close relations with the Greek Diaspora of the US. On the screen you can find two links to the Center’s noteworthy activities.

At this point, I would like to cite an excerpt from a relevant speech of the President of the Hellenic Republic Mrs Ekaterini Sakelaropoulou, which encapsulates with great accuracy the deeper significance of the Greek victory in Salamis, and I quote:

“At Thermopylae and Salamis, ancient Greece, at the dawn of its glory, came together, stood strong, fought for and saved its freedom, its independence and the humanist core of a civilization now recognized as universal. A core that already held what would later become the most precious historical legacy of Greek antiquity: democracy and the notion of the citizen, self-esteem and liberty, reason, the artistic mediation of tragedy in our very being, philosophy as a rigorous meeting of intellect, logic and the deepest human needs, and so much else that revolves around the value of Human Being.”

From my part, I would like to underline that this first and greatest of the world-historical events continues after two and a half thousand years to mark the importance of controlling the sea ways. Almost all historians from antiquity to the present converge directly on the point of view of its uniqueness both in the field of political engagement and in particular in forging relevant strategies and tactics of naval warfare.

The recorded events prove the infallible prediction capacity and intelligent planning of Themistocles. The pre-battle actions ensuring the protection of civilian Athenians, the safe movement of the population, the misleading of Xerxes by diffusing false information, the luring of the Persian fleet into the straits, the positioning of the Athenian ships to avoid being surrounded, the encouragement motivating the Greek sailors, the application of rapid navigation movements and the ramming of the heavier and slower Persian ships and their capture by boarding armed soldiers-sailors. All these have been planned and orchestrated by Themistocles and proved his strategic genius.

It is worth remembering that the brass ram (piston) of the Athenian triremes was the perfection form of this particular naval weapon that was first used again by Greeks - the Phocaeans - in the famous naval battle of Alalia a century earlier.

The historical details of the Battle of Salamis constitute a case study of this outstanding naval battle paradigm to be taught at all Naval Academies and its thorough evaluation is well known and scientifically fully documented. On the other hand, the hypothetical query: "What would have happened if the Persians had won in Salamis", leads incontestably to the conviction that without this victory, which overturned the domination plans of the Persians, we do not know what would have happened in history. In particular regarding the fact that the free state of Athens was the one that with its cultural-political character reached the spiritual culmination of the 5th century BC marked by its timeless universality. After all, the victory against the Persians brought the Athenian Hegemony to an historic level, whereby since then and for about fifty years the culture of works of intellect and art shone with a lasting radiance. And such a view certainly generates its acceptance and recognition not only by the Greeks, but mainly by the Europeans and by the western world in general.

The affinities of the historical ramifications of the Salamis naval battle to a very recent alarming situation caused by another difficult and aggressive (to say the least) neighbor, Turkey,  have been very adequately addressed by friend and colleague Ambassador Alexandros Mallias in a similar event a few days ago, so I do not need to dwell at length on them. However, I fully subscribe to his drawing a parallel to the courage and virtues of our proud members of the Greek Armed Forces who stand ready to defend not only the territorial integrity of our motherland, but the democratic values bestowed upon us by our ancestors as well. Greece has been situated by geography and history in a particular geostrategic crossroad of the globe. Thus we were obliged to always navigate through troubled waters facing mighty foes and powerful opponents, but always looking straight into their eyes and ready for all necessary sacrifice. Greece has been confronted all along its history with many Thermopylae and Salamis and, I am afraid, this will continue to be the case.  But, the Greek people will always fight to ensure that the gates of the European and universal civilization will be preserved.  They will always be worthy of global respect in the sense put so eloquently by Winston Churchill during World War II, who said: “Hence, we will not say that Greeks fight like heroes, but that heroes fight like Greeks.”, referring to the bravery and contribution of the Greek soldiers to the Allied Victory.

And one should never forget the words of the great Athenian politician of the 4th century BC, Pericles, as quoted by Thucydides:   “Great is the country that controls the Sea”. These words, which constitute the emblem of the Greek Navy, are the spiritual lighthouse that guides and inspires our thoughts and steps into the future of the Nation.

All Greeks united, we shall follow them and fight for them as our ancestors did 2500 years ago in Salamis.

Thank you for your attention