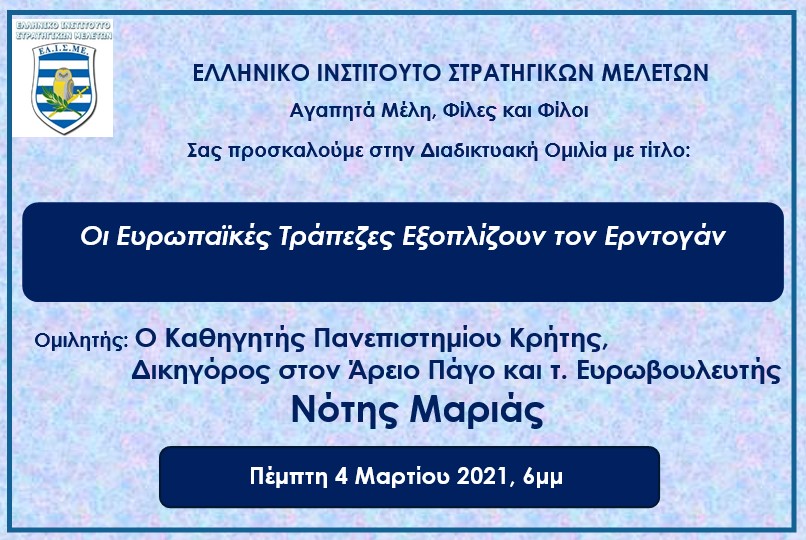 By Ippokratis Daskalakis – Lieutenant General (ret) and Director of Studies at HEL.I.S.S.

The bond between Greeks and Armenians date back to centuries ago. The two nations, neither of which has a brother nation are historically moving in a single geographical place and are facing existential threats that derive from the very same source. That is Turkey. The events happened recently in Nagorno-Karabakh are causing the Greek state and the Greek citizens as well to justifiably worry about the outcome of the conflict. Undoubtedly, the Nagorno-Karabakh case and the conflict between Armenia and Azerbaijan is a long-standing, complicated and destabilizing matter. Both sides are capable of raising legal accusations and historical deposits to support their diametrically opposed arguments. However, the aim of this article is not to focus on searching and comparing the views of these two countries. Such a venture would be quite difficult, bearing in mind that our support towards the co-religionist people tortured by the same occupier is obvious. I will just make an effort to highlight some main points of the recent recurrence of the conflict that seems to have caused a military struggle to our likeable Armenians.

The first point to focus on is the weakness (or maybe the reluctance) of the international community to impose an end to the hostilities. Although, Russia, France, the U.S.A and the E.U. have all called for a peaceful solution of the problem, they have not practically moved into any decisive action that would force the two parties to abort a military resolution. In consequence, it is better to reconsider the willingness of the international community and its capability of a direct intervention to a possible conflict between Greece and Turkey. The belief that such a conflict will last just a few hours up until an international mediation is reached, as it is often and frivolously stated, is not certain either.

The second point that is also a cause of worry is the value of strategic commitments and security guarantees made by powerful countries that are often trying to find a balance between counterbalancing interests or, even worse, they must choose and support the most valuable of the two warring parties. Armenia and Russia are members of the Collective Security Treaty Organization (CSTO), a defense alliance made with the standards of NATO, under the auspices of Moscow. Furthermore, there are Russian military bases on the land of Armenia where Russian troops are stationing. Nevertheless, Moscow’s reaction to date is quite lukewarm, invoking the truly (from the point of international law) problematic status of Nagorno-Karabakh. Russia itself, however has imposed similar regimes to various regions of the former ‘Empire’. As a result, the presence of allied and friendly troops, the right to install military bases and the strategic relations, always under the scope of power imbalance, are useful and welcome, but they do not fully ensure the national sovereign rights and interests. Especially, in the case of Greece and Turkey, despite the abnormalities of the latter, the fear of a final autonomy and withdrawal from the western camp leads the U.S.A. and the EU to unacceptably trying to keep a proper balance, which sometimes results in a serious approval Turkey’s provocative actions.

The third point is relevant to demographics and economy. Azerbaijan is three times more   populated and has a six times higher GNP and twice as high per capita income. These numbers inevitably translate to a respectively bigger defense power. Any qualitative difference of human resources (in favor of Armenia) will, sooner or later, be balanced by the quantitative difference (in personnel and media) that Baku is showing on the battle field. In addition, Azerbaijan’s war machine is becoming more powerful day by day, considering that it receives multidimensional support from Turkey.

The fourth and, probably the most important point, is that Yerevan, being financially weakened after almost three decades of competition and conflicts, has faced very crucial internal political disputes while searching for external guidelines. Those disputes distracted the attention from the open wound of Nagorno-Karabakh, weakening its financial capacity and, in consequence, inevitably attenuated its defensive preparation. Moreover, Moscow’s partial reversal that seems to be choosing the role of an honest mediator between the two rivalries in order to preserve its dominant position in Caucasus was not properly foreseen. A Russian-inspired and imposed pacification or, even a resolution would certainly boost the Russian presence in the region.

The fifth point goes as following. Azerbaijan set the reconquering of Nagorno-Karabakh as the main national goal, especially after the painful loss of the early 90s, despite the fact that the region is inhabited by a vast majority of Armenians. In the intervening years, Baku suffered various tactical losses in small scale incidents at its borders without losing its willingness to reclaim national territory through a powerful confrontation. The Eurasian country has, however, worked with method to reconstruct its armed forces. At the same time, Azerbaijan moved very carefully between Moscow and the West, making an effort to keep safe distance, but inevitably leaning towards the familiar Turkish nation. The moment of the Azeri national campaign was chosen to be timely with the moment when Russia and Turkey are moving abnormally in line with each other, while the U.S.A. (where a very active Azeri lobby is rising) is acting and reacting in an introvert and unpredictable way.

We, as Greek people, ought to think beyond any emotion and to carefully examine the factors leading Armenia in today’s unfavorable state. The General Staffs are examining, with no doubt, the operational features of the conflicts and they are constantly updating the Turkish movement, media and doctrine profile. We would like to vision a positive outcome of the operations in favor of the Armenian forces with great joy and satisfaction and to, generally experience an end to the hostilities, followed by a fair, peaceful and permanent solution of the problem. We have to take into consideration that a fair and peaceful solution – the one that the civilized world would like to see in the Nagorno-Karabakh – requires mutual concessions by both parties, though. More concessions should, however, be made by the less powerful party or, in the case of conflict, the loser party. In consequence, the reinforcement of all types of power, focusing on the military power is at any cost the only way forward for Greece.