2016-03-14. The Mediterranean as a Strategic Environment Learning a New Geopolitical Language 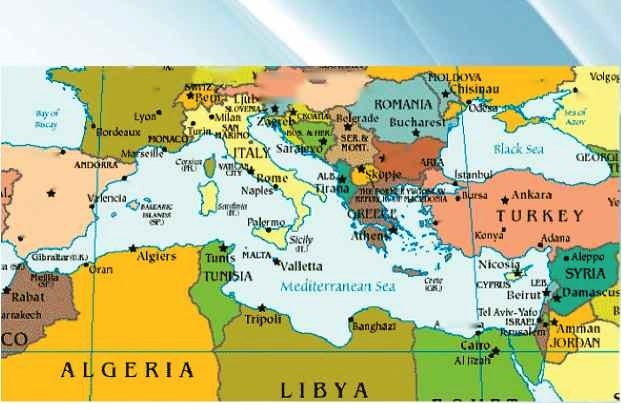 Table of Contents
EXECUTIVE SUMMARY    7
INTRODUCTION : WHY THE MEDITERRANEAN MATTERS, 9
SEA-BORNE TRAGEDIES: FACING THE CONSEQUENCES OF CHAOS, 14
ENEMIES AT THE WATER’S EDGE: TOTALITARIAN ISLAMIST FORCES ON MEDITERRANEAN SHORES, 19
THE OTHER SIDE OF THE COIN: TRADE, INVESTMENT, AND ENERGY COOPERATION, 26
THE BUILDING BLOCKS: BILATERAL (AND TRILATERAL) LINKS IN THE EASTERN MEDITERRANEAN …. , 30

CEMENTING THE BRICKS: THE CULTURAL DIMENSION OF MEDITERRANEAN IDENTITY, 36
MEDITERRANEAN SECURITY ARCHITECTURES: WHERE DO WE GO FROM HERE?, 40

EXECUTIVE SUMMARY
Dramatic events in 2015 have brought into focus two dangerous challenges – and an important opportunity – turning the Eastern Mediterranean into one of the key areas for global security:
•The refugee crisis due to chaotic conditions in Syria, Libya and beyond;
•The growing hold, upon Mediterranean shores, of totalitarian Islamism in its various forms – Iran’s camp; Islamic State; and the Muslim Brotherhood (with Turkey and Qatar as allies).
•The prospects for cooperation in the field of energy.
All of this is giving rise to closer cooperation within the Mediterranean framework, as demonstrated by the January 27 2016 tripartite summit of Israel, Cyprus and Greece (a parallel process already links Egypt and the two Hellenic countries). The Union for the Mediterranean is important as a symbol of cooperation, but weak and underfunded: thus, such building blocks are a step in the right direction.
Download HERE!