Germany and Turkey: Friends and Allies in Genocides. The case of the Herero and Nama Genocide that Turkey implemented after Germany. – By Ioannis Ath. Baltzois, a Lieutenant General ret., has a Master’s Degree (M.Sc.) in Geopolitics – 29.06.2021

Germany and Turkey: Friends and Allies in Genocides. The case of the Herero and Nama Genocide that Turkey implemented after Germany. 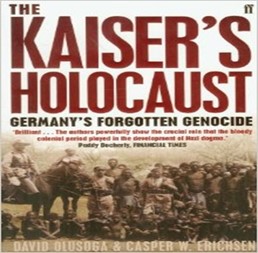 The recognition of the Armenian Genocide by the USA, at this very historical moment when U.S. President Biden uttering the word ‘genocide’ has irrevocably shaped the reality around the shocking crime against humanity that was committed by the Turks (then Ottomans) against the Armenian people is a historical event. The consequences of this critical recognition are going to shape Turkey’s future. At last, historical justice even somehow late got an out of habit genocidal people, the Turkish people that has been killing other peoples, like Greek Pontiacs and Assyrians, what they historically deserve. Genocides of people will from now on stigmatize the words Turkey and Turkish and humanity will think of them as such, eternally. Despite Turkish reaction statements talking of a historical illusion and a non-scientifically proven documentation, still ignoring Turkey’s historical responsibility in a quite provocative fashion, and failing to recognize that thousands of Armenian people died, in a frightful and structured way, responsibility returns in mind, like Furies, to point and add the Turkish on the much dreadful list of peoples having committed crimes against humanity. And, on that very list of peoples that have caused genocides and are guilty of crimes against humanity, is Turkey’s eternal friend, Germany, which apart from being responsible for two world wars, has also taught genocide methodology, implemented by its close friend country, Turkey. However, at this very moment, we will not refer to the Holocaust during WWII, nor to the Armenian Genocide that everyone is aware of, but we will elaborate on another crime, another genocide which is hardly unknown and it is the first genocide of the 20th century. It is the genocide of the Herero and Nama (Namaka) tribes, carried out by the Germans. The method of this genocide was adopted by the Turks.

German Southwest Africa (Deutsch-Südwestafrika) was a German Empire colony in Africa from 1884 to 1915. Covering 835.100 km², it was one and a half times as big as mainland German Empire. During World War I, British and South African powers invaded and occupied German Southwest Africa in 1915. Following the end of the war, the region was administered by the Union of South Africa (a part of the British Empire), and it was given the name German South West Africa, under the mandate of the League of Nations. German South West Africa became an independent state in 1990, and it was then named Namibia. Herero and Nama were a people that was mainly comprised of farmers that German colonizers tried to modernize and turn into farmers, agricultural labourers and workers of their colonial companies. Nevertheless, the ownership regime and the way German colonizers handled it was the main reason that led those tribes in an uprising against them. The Herero tribe had granted more than one fourth of the 130,000 square meters of land they owned for the construction of the Otavi railway line, which supposedly aimed at the development of the region, whereas it would, in reality, trigger the invasion of other colonizers coming to exploit the region’s land and the resources of the indigenous people. Moreover, it is worth mentioning that the Germans, always aiming at the region’s development, as German historian Horst Drechsler points out, were planning the deportation of the Herero tribe in national reservations (special residencies) as well as the occupation of their land for free, with Herero working on their very land, since the land was considered to belong to the German colonizers. After all, there was a considerable number of Herero people that were used as slave-workers in German operations. Horst Drechsler goes a step further vividly portraying the gap between the rights of the African and European people: “The German administration believes that the testimony of a white European is equally powerful to the testimony of seven (7) black Africans (!!!) in matters of law and justice. That meant that an Africans could easily lose their property and land if one or more Europeans claimed they owned it. The court would decide in favor of the white colonizers.

On January 12, 1904, the Herero tribe led by Samuel Maharero rebelled and attacked against the Germans, killing around 123-150 of them. Later on May, German Lieu. Gen. Lothar von Trotha arrived alongside with 14,000 soldiers and carried away hostile operations against Herero. On August 1904, he won the battle against Herero in Waterberg, and, after slaughtering many of them, he forced most of the Herero people to the Omaheke desert where they died of hunger and, most commonly, thirst. Furthermore, it has been documented that, leading Herero to death, the Germans had poisoned or totally destroyed the limited numbers of water wells in the desert, so that the planned and staged death of a whole people, that is, its genocide is totally ensured. On October 1904, the Nama tribe also led an uprising against the Germans to be exterminated in the very same fashion as Herero were.

The order to the Herero’s Genocide was given by Lt. Gen. Trotha himself, when uttering his decree: “The Herero nation has to immediately abandon the country since they are not German citizens anymore. Anyone who disobeys this order and is found within the country, with or without a weapon or an animal, will be executed without further ado! I will show no mercy to anybody…I give my orders to be followed…” According to the orders of Lt. Gen. Trotha, Herero men had to be executed right away, while Herero women and children had to be deported to the desert, leading to their torturing death! 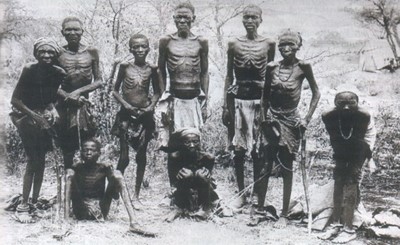 According to various testimonies, about 80% of the two peoples perished. Though an exact calculation is impossible, about 65,000 to 100,000 Herero and about 10, 0000 Nama died in various ways. Those who eventually survived were around 15,000 Herero, mostly women and children, and a handful of men. They were collected and taken by German colonialists to concentration camps, such as the Shark Island Concentration Camp, where they were coerced into brutal forced labor in German estates and businesses, only given rice and nothing more. Of course many died from hardships, diseases, lack of vitamins and brutal work. In 1918, everything about the situation of the German concentration camps was announced in a British report, where it is characteristically stated that 45% -74% of the gathered Herero and Nama people passed away due to the abhorrent living conditions, mainly women and under-aged children!!!

Even for the German “scientists”, these races were a brilliant and safe field of anthropological and other scientific research. The German anthropologist Eugen Fischer went to the concentration camps to conduct anthropological studies and racial experiments. He collected samples from Herero children (both living and dead) and from mixed children, i.e. from children with a German father and a Herero mother. Zoologist Leopard Schultze expressed his excitement over the fact that he could take organs from “fresh corpses” and that prisoners should be used for this purpose. That is, to exterminate a prisoner in order to take his vital organs!!!!!!!! Concluding the description of this horror, let me mention that 300 skulls of the prisoners in the concentration camps were sent to Germany for further research and for other “prominent” German scientists to prove the “superiority of the (German) white race and the inferiority of the black race of the Herero people!!! And they seem to have come to the conclusion that: “The German race is clearly superior to the black Herero.”

In 1985, the United Nations Whitaker Report classified this massacre “as an attempt to exterminate the Herero and Nama peoples of South West Africa and therefore the first genocide of the 20th century “!!! In 1998, German President Roman Herzog visited Namibia and met with Herero leaders. Leader Munjuku Nguvauva demanded a public apology and financial compensation. The German president only expressed his regret. No word about the compensation.Germany formally apologized in 2004 for the atrocities in Namibia, but refused to pay compensation to the relatives of the victims. 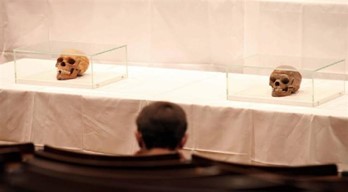 Finally, in October 2011, tribal leaders from Namibia traveled to Berlin to collect the skulls of 20 of their compatriots (16 men and 4 women), remnants of the colonial hegemony of the Second Reich. Thus, it was historically proved that the first genocide of the 20th century was committed by the German Second Reich in a horrible way and was repeated in an even more horrible way by the Third Reich. Many historians link Germany and Turkey to this terror and crime dynamic and this explains, apart from mutual interests, the mutual attraction, love and timeless friendship, cooperation and special relationship between these two countries. A special and close relationship that began in the late 19thcentury (1888) with the beginning of the construction of the Berlin-Baghdad railway (originally Istanbul-Baghdad). A railway that would connect Berlin with the Persian Gulf and provide Germany with an efficient connection and a convenient way of transporting and communicating with its colonies in Africa, namely with German East Africa (Tanzania) and German Southwest Africa (Namibia). A special relationship, which apart from the economic interests, connected the two countries with inseparable ties of friendship and cooperation, which remain unchanged for more than two centuries, as they resemble a show of cruelty, to a degree of barbarism. And that’s not all of it. It is pointed out they influenced one another and followed the same methods in practices, both genocidal and criminal, taking examples from each other. Thus the first genocide of the 20th century by the Germans was followed by the genocide of the Armenians by the Ottoman Turks in 1915, with similar methods (desert march, torture, executions, etc.). The Turks continued in the 1910s and 1920s with the genocides of Greek Pontiacs and Assyrians, which we must finally seek international recognition for. Then the baton was taken by their Nazi German “friends”, with the terrible holocaust of the Jews, during the Second World War, which is now recognized by all mankind. The Turks then applied new methods of expulsion against the Greeks of Constantinople with the 1955 pogroms and in recent decades against the Kurds. This explains the special bond between Germans and Turks over time, not only geopolitically or economically, but also in relation to the mentality of the two peoples, who alone have proven to have committed genocides against other peoples in the 20th century, where the term genocide is valid under international law. Finally, let the Turks consider the consequences of the US President’s report on the Armenian Genocide, as well as the deliberate mention of the real name of the city as Constantinople, which has special significance and clearly hides future developments. Is it time for the historic Nemesis of Turkey?

* *Ioannis Ath. Baltzois is a Lieutenant General ret., has a Master’s Degree (M.Sc.) in Geopolitics from the National & Kapodistrian University of Athens and is President of the Hellenic Institute for Strategic Studies (HELISS).