Ursula, Charles’ Ambassador and Erdogan the Magnificent – by Ioannis Baltzois, a Lieutenant General ret., with a M.Sc. in geopolitics of National & Kapodistrian University of Athens, and the president of HEL.I.S.S.- 29-6-2021 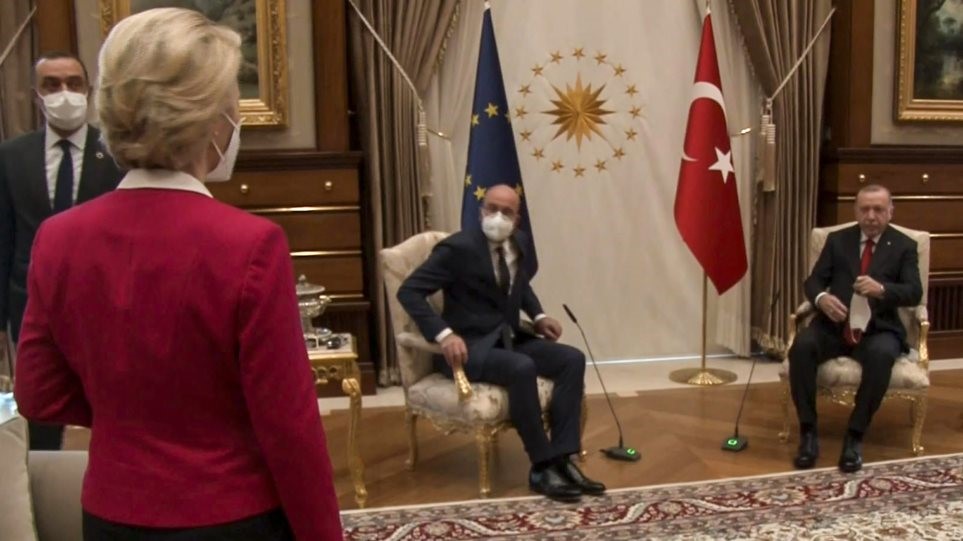 The diplomatic incident that took place in Turkey with the EU leadership considered as “victims”, the so-called “Sofa Gate”, illustrated by the incredible indecency and insult that the Turks reserved to  the high guests of the EU, sparked a lot of reactions, analyses, criticisms, and harsh statements against Turkey and especially against President Erdogan, such as the undiplomatic remark of the Italian Prime Minister Mario Draghi who called him a dictator, causing apparent turbulence to the so far really good Italian-Turkish relations.

But let’s look at the now infamous “Sofa Gate” and see if it was accidental, a mere mistake of the protocol services of the two sides, or if  there is something else that stems from the past and explains the unnecessary, weird and offensive acts that the Turks  have been used to perpetrating  these past few years. We must make it clear from the outset that this is not a mistake, a case of negligence or an imperfect oversight of those responsible for the Protocol. The responsibility lies in the EU Protocol officials, as the Turkish-Kurdish Foreign Minister of Turkey claimed with oriental chicanery, since the European Protocol Officers were not allowed in the meeting room for security reasons!!! So now the question arises: what was the reason for this impropriety and insult especially against the President of the Commission Mrs. Ursula von der Leyen, who was deliberately left standing, looking awkwardly at the chair that did not exist for her to sit, only to finally sit opposite the Sultan on the couch, a clear sign of disdain? There were only two chairs – thrones for the men in the meeting room, one for the Sultan and the other for the immodest and rude Mr. Michel. None for women. If there was a Lady Chapel, they would’ve probably made her sit there!

Suleiman the Magnificent and Charles’ Ambassador.

The explanation is simple, it stems from the past and it has to do with Erdogan’s mentality and geopolitical perception today. Thus, this “caprice” of the Turkish president towards the president of the Commission, has a tradition of 500 years, as a similar story is written in the “Encyclopedic Dictionary of Anecdotes”, published in Paris in 1929. An ambassador of Charles Quint (1550-1558), a Holy Roman Emperor, was summoned for consultations by Sultan Suleiman (the so-called “Magnificent”). When he entered the meeting room, he noticed that there was no seat for him, so he’d have to deliberately stay standing and thus belittling his position. He immediately took off his coat, threw it on the floor and sat down. He was impeccable in the negotiations, a fact that even the Sultan acknowledged. When the meeting was over he got up, and left without taking his coat. When he was reminded of that, the ambassador replied: “The king’s ambassadors are not used to taking their seats with them”.

The attitude of President Erdogan, who has a soft spot for symbolism , stems from the past and emphatically underpins the different mentality, culture and behavior of a Europe he hates, but constantly blackmails and uses it only to suck money from nonetheless. This way, he’s trying to emit the message of a strong and great Turkey, which acts autonomously as a large and independent regional power and does not accept advice, admonitions, or reprimands for its international stance. Hence his constant insults to state leaders and his unacceptable behavior and stance towards the diplomatic culture. The German politician Ursula von der Leyen, whose country was ruled by Emperor Charles Quint and Charles Michel, whose country belonged to the Holy Roman Empire, as well as the ambassadors of the EU countries, should have been taught some facts and have been informed about the descendants of Genghis Khan, so that the Turks do not take them for the same idiots they have been for the last 500 years. Stories like this one and many others should be taught in diplomatic academies.

President Erdogan deliberately downgraded the President of the Commission for two well-known reasons: Because she is a woman (whose position is lower according   to the fundamental principles of Islam) and because he wanted to send her the message that she should not use human rights or judge Turkey for their violations, such as the recent withdrawal from the Istanbul Convention. In addition, the female leader of the EU had to be humiliated and thus humiliating EU as well, and that is why he chose her and not the man. We must add that Mr. Michel’s attitude was unacceptable, unethical and rude, which is not at all appropriate for the ethics of Western culture. Let everyone in Europe realize that, due to economic interests, they conveniently forget the history and the different culture of nation that has nothing to do with European culture. This is the same attitude and behavior he applies to Greece, where the constant provocations, insults and aggressive actions are intentional, systematic and continuous, until our homeland is subjugated, resulting in loss of national sovereignty. (Of course I reckon) I estimate that they will not succeed.

Finally, let us mention the place of Turkey in world history and culture. The 19th century Russian thinker Nikolai Danilevsky said that human societies are divided into two categories, the Creators of Civilization, which of course includes Greece, along with other nations and cultures, such as the Egyptians, the Romans, etc. and the Destroyers of Culture, where only three nations are included: the Huns, the Mongols and the Turks. And these peoples have always been the Negative Factors of History. And this was and still is Erdogan’s Turkey today and let our friends and allies know that very well, because they are the ones who tolerate and pamper and finance such a Turkey, with a oppressive  regime, a rule of law in remission, a geostrategic pirate, a state in global turmoil, with a president who dreams of Ottoman grandeur and modern achievements, such as pharaonic projects  (e.g. the Istanbul Canal) or conquering the moon in two years’ time, as they boast. So let them aim for the Moon and leave Greece and the West alone in their different culture, which Turkey has nothing to do with.

* Ioannis Ath. Baltzois is a Lieutenant General ret., with a M.Sc. in geopolitics of National & Kapodistrian University of Athens, and the president of HEL.I.S.S.(Hellenic Institute for Strategic Studies).